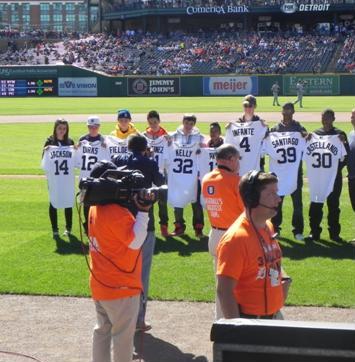 Due to the generosity of Comerica bank, fifty Children’s Village residents, parents and staff were guests at a recent Detroit Tiger baseball game at Comerica park.

Adding to the excitement-nine lucky youth were selected to participate as the “Starting Nine”. Nine youth were led onto the field, introduced prior to the game and each received an autographed jersey of one of the nine starting Detroit Tiger players.

Comerica bank has been a long standing regional leader in community stewardship. The “Starting Nine” program is an annual recognition to honor and support young people according to Al Taylor, SVP National Director Bankcard Services for Comerica. Taylor was instrumental in securing the opportunity for the Children’s Village youngsters.

From the terrific weather, baseball and hot dogs and drinks (courtesy of the Children’s Village Foundation who covered lunch for the entire group) it was a terrific day for all participants.